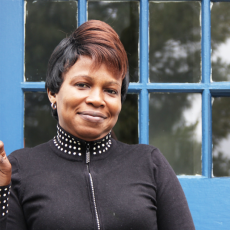 After moving from war-torn Angola, Nsevilo “Helen” Shabani was connected with The Opportunity Alliance’s Project WIN (Women In Neighborhoods), a two-generation strategy, supported by United Way of Greater Portland’s Women United, designed to create a pathway out of poverty.

Helen first worked with her Project WIN family coach to enroll in English courses and a Certified Nursing Assistant Program at Portland Adult Education. The Greater Portland YMCA connected her to a mentor who provided in-home childcare so she could attend classes. Her hard work paid off and promptly after passing her CNA test, she was hired by a nursing facility in Falmouth.

Helen’s next goal was to secure housing that felt more suitable and safe for her family. She jumped into action with her Project WIN team who helped her find a new apartment. They then connected her to a micro loan for new Mainers through ProsperityME where she received a loan that gave her enough for a deposit and first month’s rent on a new home. Her Project WIN team also connected her to a grant from Bob’s Furniture that allowed her to furnish her new home.

Helen is one step closer to her goal of becoming a physical therapist and is well on her way to paying back her micro loan. Her three children are excelling. Her oldest has also worked through the emotional turbulence of his past and is beginning to flourish and engage with his peers while her youngest thrives in Head Start and is excited to start Kindergarten this fall.

Helen has obtained safe, stable housing, found employment, and secured support and care for her children. We cannot wait to see what she will accomplish over the next three years with the ongoing support from her Project WIN team!