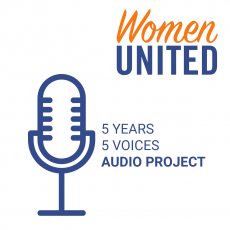 One of our five voices is Diane Garofalo, United Way of Southern Maine Board Chair and founding Co-chair of Women United. Diane worked alongside Nicole Witherbee to establish Women United and bring women, partners, and supporters together to lift and wrap around other local women and their children. Diane’s work has led to five years of impact and a membership count of over 400 that have given, advocated, and volunteered to support two-generational strategies.