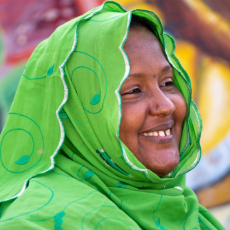 Help women like Fatouma achieve their dreams in Greater Portland

United Way of Greater Portland‘s Women United is helping mothers and their children in Greater Portland achieve their dreams. One of those women is Fatouma. In November of 2014, Fatouma made a life-altering journey from East Africa’s Djibouti to the United States. The challenges of the trip were compounding, as the single mother of four, now pregnant with her fifth, navigating a new country, and new language,  leaving her country, and family behind. With barely more than what she could carry, Fatouma and her family began a new life together in Maine. Fatouma shared, “I wanted a better future for (my children). You could say seeing my kids happy was my motivation.”

After years of start and stop attempts to rise from poverty, Fatouma connected with Project WIN, supported by Women United. “Project WIN and Women United helped me and my kids have a better life. They are like the light in the darkness.” Before Project WIN, Fatouma relied on General Assistance and other supportive services to make ends meet. Since being a part of the Project WIN cohort, Fatouma found part-time then full-time employment, empowering her to move away from General Assistance, and learned how to drive. Fatouma shared, “(Through Project WIN), I became a proud and independent woman.”

Fatouma and her family are one of over a dozen single mothers and their children currently enrolled in Project WIN, a program operated by The Opportunity Alliance (TOA), and support by Women United. Project WIN (Women In Neighborhoods) is a two-generation strategy designed to create a pathway out of poverty. The program utilizes an evidence-based coaching model to help mothers identify unique goals for their family and track progress. Also, children of the cohort receive high-quality early childhood education within Head Start and Early Head Start programs or other providers.

Since 2018, Project WIN has served 22 moms and 70 children with families ranging from 10 different countries. Though 2020’s challenges have presented significant setbacks, cohort members celebrated the accomplishment of seeing all participants move beyond the need for financial support from General Assistance. Additionally, all the children birth to age five in the program accessed high-quality early childhood education and received special services if indicated.

You can make a difference in the lives of Greater Portland women and children through Women United today. Learn more and become a member at womenunitedgp.org.